To get a sense of what makes Keating Machine tick, you have to understand Keating himself. In 1988, he started in a car audio business working from home. Four years later, he opened Audio Specialties in Knoxville, TN. The shop established a reputation for quality work and exceptional knowledge about how to integrate audio components into a complete system.  Keating spent thousands of hours building and refining audio systems including enclosures, subwoofers, speaker combinations, and passive crossover networks. At one point, Audio Specialties was the #2 single store location in the southeast for Pioneer Premier audio components and even offered its own line of PSI brand subwoofers built to Keating’s exacting specifications. Not bad for a shop of 2,100 square feet battling head to head against shops two and three times his size. Keating’s drive for perfection and commitment to customer service cultivated a loyal customer base through the store’s closing in 2007, allowing him to focus on the growth of Keating Machine. 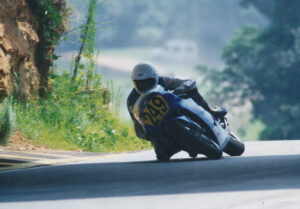 During this time in 1994, Keating got his start in competition racing motorcycles in Formula 2 and Formula 1 Expert of WERA and CCS, finishing #2 nationally in Formula 2 during his rookie year. He competed at Daytona in Formula 2 under CCS in 1996 and 1997. Keating constantly searched for parts in his quest for speed and handling, looking for an advantage under the existing rules. When it seemed parts didn’t exist to fill his needs, he bought a Kitamura 3 axis machining center with the intent of machining his own. While racing related injuries limited Keating’s race participation after the 1998 season, his racing experience exposed him to his first Cummins powered Dodge pickup. The dually that towed his 24 foot trailer, bikes, spare parts, and tire changing equipment would set the stage for his next endeavor. He found the truck to be lacking in power and began to seek out solutions from existing reputable diesel performance companies. After installing an intake and exhaust, followed by injectors, he was disappointed with the results. Following research of fuel and turbo tuning, Keating was finally able to realize the significant performance improvements he had been seeking. 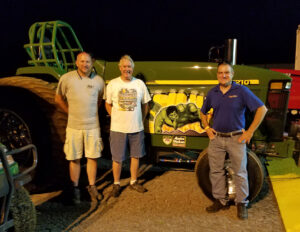 It was also during this time that Keating attended his first tractor pull and discovered a hidden world of performance diesel!  The technology that the pullers were employing seemed completely applicable to the 6B Cummins in Keating’s mind.  Upon his return home he began development of the first twin turbo system for his street truck.  During this time, Keating met Jeff Prince.  He and Jeff seemed headed down the parallel paths and shared their finding and ideas.  In 1998, their efforts led to the development the first effective twin turbo kits for street trucks using HT3B and HX40 turbos.  The development of this system led to the furthering of an existing relationship with Dave Mitchell and Enterprise Engine Performance as a supplier of components for their twin turbo systems- a relationship that continues today.  With guidance from diesel truck pulling pioneer Dave Mitchell, Keating found his stride in developing tuning methods for the 6B powerplant that truly exploited its hidden potential.  From 1998 through 2005, Keating continued to drive his twin turbo equipped Dually on the street and the strip, adjusting on the truck to further maximize performance.  He knew he was really onto something while walking the PRI Show and saw some of his own components in a manufacturer’s booth displaying “their” twin turbo kit.

By way of introduction from Dave Mitchell at Enterprise Engine Performance, Keating met Bob Holmes who has been another of his mentors.  Bob provided significant technical insight from his own diesel performance R&D experience.  Bob was a veteran tractor puller and SFI certified clutch manufacturer that shared numerous insights that helped shape the direction of Keating Machine.  Also during this time, Keating consumed every piece of information he could locate regarding diesel performance, assembly of fuel pumps, and the inner working of the diesel engine.  He continued to talk with tractor pullers, evaluating the different ways they chose to make power in their rigs.  New products including aftermarket freeze plugs, front gear housing covers, and side tappet covers emerged from Keating Machine answering the demand for more functional, stronger, and better looking parts. Keating has spent the past several years researching, designing and refining his ideas and products.  Much of his development has revolved around his rolling test labs.  In addition to his street driven diesel pickups, these include a Pro Mod Diesel Pick up and Diesel Dragster.  For more information on these two vehicles, please visit the PROJECTS page.Making quality parts requires quality equipment and Keating Machine has ample supply of that.  In addition to the normal bits you would expect in a fully capable machining facility such as sand & glass bead blasting cabinets, TIG welder, band saw and high output compressors, Keating has 5 quality CNC turning and machining centers.  These include:

Keating Machine also houses a Heins TC3 Turbo Balancer for in-house turbo modification and building, one of their specialties.